A great time was enjoyed by the members of the Harbor Hills Country Club at the 2008 Marinated Mariners Christmas Boat Parade. Please enjoy the slideshow below of the festivities along the canals and Lake Griffin.

Boat Year Round in Lake Griffin
Posted by Unknown at 12:47 PM

Chief Ed Nathanson of the Lady Lake Police Department has teamed up with the local Chapter of the Military Order of the Purple Heart to collect used cell phones to benefit our military personnel serving overseas. In turn, Harbor Hills Country Club has agreed to join as a sponsor for this worthwhile cause called “Cell Phones for Soldiers.”

Cell Phones for Soldiers hopes to turn old cell phones into more than 12 million minutes of prepaid calling cards for U.S. troops stationed overseas in 2008. To do so, Cell Phones for Soldiers expects to collect 50,000 cell phones each month through a network of more than 3,000 collection sites across the country. At Harbor Hills, we are proud to be one of the collection sites, with a donation box located just outside our Pro Shop.

The phones are sent to ReCellular, which pays Cell Phones for Soldiers for each donated phone – enough to provide an hour of talk time to soldiers abroad.

“Americans will replace an estimated 130 million cell phones this year,” says Mike Newman, vice president of ReCellular, “with the majority of phones either discarded or stuffed in a drawer. Most people don’t realize that the small sacrifice of donating their unwanted phones can have a tremendous benefit for a worthy cause like Cell Phones for Soldiers.”

Cell Phones for Soldiers was founded by teenagers Robbie and Brittany Bergquist from Norwell, Mass., with $21 of their own money. Since then, the registered 501c3 non-profit organization has raised almost $2 million in donations and distributed more than 500,000 prepaid calling cards to soldiers serving overseas. Some of the soldiers serving in Iraq have run up cell phone bills of more than $5,000 just in calls to home.

“Cell Phones for Soldiers started as a small way to show our family’s appreciation for the men and women who have sacrificed the day-to-day contact with their own families to serve in the U.S. armed forces,” says the teens’ father, Bob Bergquist. “Over the past few years, we have been overwhelmed by the generosity of others. But, we have also seen the need to support our troops continue to grow as more troops are sent overseas for longer assignments.”

Through increased fundraising efforts, the Bergquist family hopes to raise more than $9 million in the next five years to fund new programs, such as providing video phones with prepaid service to allow soldiers abroad to see their families on a regular basis. W

We invite all Harbor Hills Residents to drop their unused cell phones in the box outside the Pro Shop
Posted by Michael Rich at 4:57 AM

Elvis is in the House 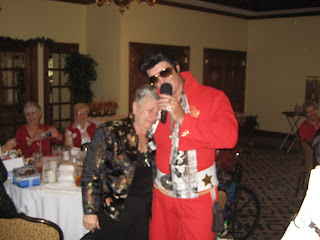 Lotsa special people show up for events and parties at Harbor Hills.
"E" showed up for a Ladies Christmas Party to entertain the Gals.
Posted by Michael Rich at 11:16 AM

Harbor Hills Ladies Charity hosted a golf tournament this weekend to raise money for local charities in the immediate area. It was a beautiful day for golf and great way to give back to the community. Please enjoy the pictures below:

Just a reminder
The final meeting of the Mandatory Social/Tennis Membership Committee will be on Thursday December 11 at 10:00 A.M.
Gary Fuchs the attorney that is doing the documents will be in attendance to answer any questions.
This will be the final meeting prior to a vote by the Association which should take place in January.
All interested parties are invited to attend.
Please mark your calendars to attend if at all possible.
Posted by Michael Rich at 4:59 PM

Please remember that outdoor irrigation is restricted to no more than two times per week.

Watering must occure between the hours of 4 PM and 10 AM to ensure compliance and watering efficiency.

Please monitor your lawn as it may require far less water during the winter dormancy period and only water when needed (up to two times per week).

For further information please visit: Here
Posted by Unknown at 7:37 AM

The now famous Harbor Hills Cookie Lady Lillian "Lil" Riley was delighted to be greeted by one of her greatest and beloved customers. If you don't know by now, Lil, has been busy baking tens of thousands of cookies for her Treat the Troops program and sending them to our troops oversees. This small act of kindness and show of appreciation for our troops and country has garnered local and national media attention, however, her greatest reward for her hard work can be seen in the pictures below:

www.harborhills.com
Posted by Unknown at 8:07 AM

Just a reminder there will be a Roundtable Meeting at 10:30 on Wednesday December
3rd in the Clubhouse.

All interested parties are invited to attend.
Posted by Michael Rich at 1:13 PM