We at Harbor Hills wish our residents, members and staff and their families a safe and happy holiday to start off a great new year. Don't forget - there is a meeting of the Round Table Discussion Group scheduled for 10:30 am on Wednesday, January 3. All interested residents are invited to attend. Hope to see you there!
Mary
Posted by Michael Rich at 11:19 AM 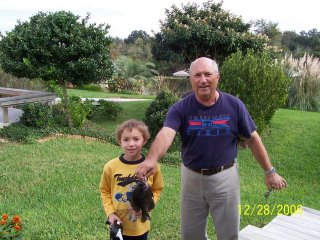 . He and their other two grandsons have been fishing from their boat dock all week with Grandpa Dale. They have been catching tons of shiners, crappie and bluegills using pizza crust for bait! Now that you know the secret, you're ready for the upcoming tournamnet! If you have photos you would like to share, please email them to me at mhuey@harborhills.com.
Mary

Calling All Fishermen (or Ladies)!

Get out your rods and reels and start practicing! The first annual Harbor Hills Marinated Mariners Fishing Tournament will be held from 10:00 am to 1:00 pm on Monday, February 12 in the Orange Canal. As you can see by the photos, there are plenty of fish to catch! The tournament is open to all Harbor Hills Residents - guys and gals! You may fish from boats, docks or the marina. The registration fee of $5.00 goes toward prizes for biggest fish, bass, crappie, bluegill and other!?! Separate prizes will be given for boaters and non-boaters. If you have questions, contact residnets Tiit Gentalen, Bill Murn, DaveElle, Ray Johnson or Jim Shadoin. 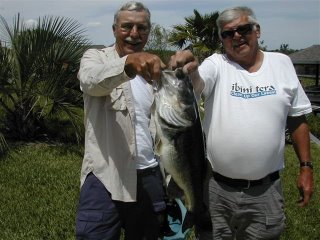 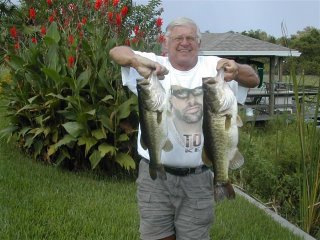 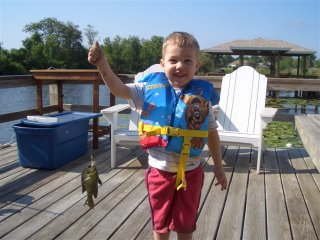 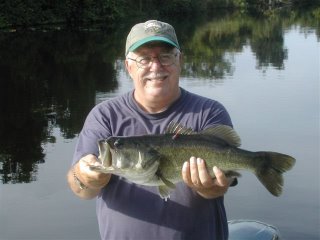 Thank you to Liz Shadoin for sharing her photos of the December Harbor Hills Garden & Women's Club meeting and tour of Harbor Hills homes decked out in holiday finery. After a meeting and delicious lunch, the ladies toured the splendidly decorated homes of several of their neighbors. 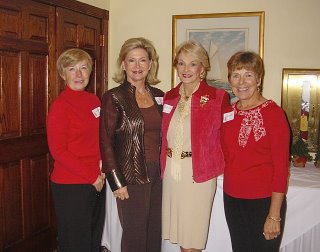 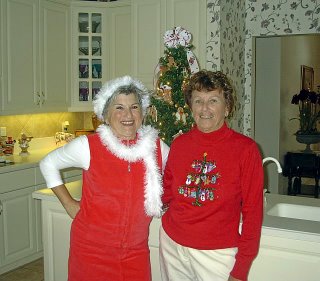 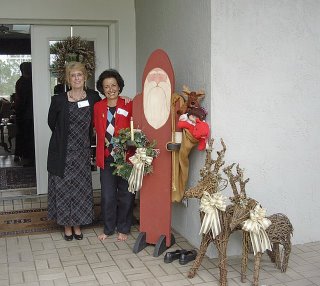 Lita Edwards has provided us with some great group photographs taken at our tennis center. Thank you, Mrs. Edwards! 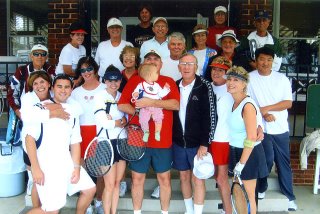 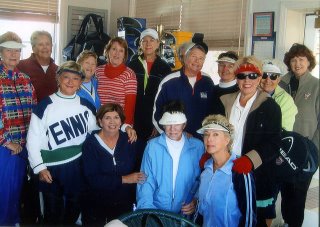 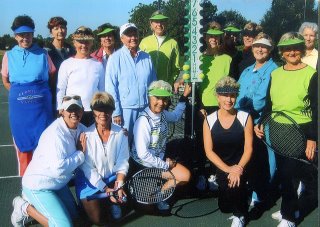 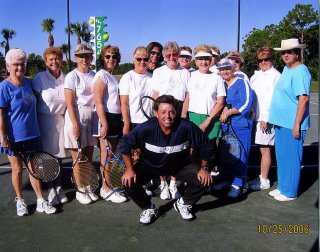 Thanks to everyone who contributed food! And thanks to Bill and Ginny McKillop for delivering the food to the Lady Lake Food Pantry. Our contributions will be used to build grocery bags that are given each month to local needy families. For more information, check out their blog at llcfp.blogspot.com!
Posted by Michael Rich at 8:05 AM

A memorial service will be held for long time Harbor Hills resident Laddie Maginess at 11:00 am on Friday, December 22 at the Beyers Funeral Home in Lady Lake. The family requests that in lieu of flowers contributions be made to the Diabetes Foundation.
Posted by Michael Rich at 9:46 AM

The HOA's Day in Court

Last week Michael Rich and I, along with the Homeowners' Association attorney Phil Smith, met with Judge Mark Hill in his chambers. Residents Ralph and Arlene Udick were also in attendance. We were there to ask Judge Hill, on behalf of Harbor hills Homeowners' Association, to find the Gahans in default for not responding to our complaint of unpaid assessments and non-compliance issues.
Mr. and Mrs. Udick had asked the Judge to grant a Motion to intervene in the case. They wished to have Harbor Hills Homeowners' Association removed as the complainant and replaced by the developer. The Judge denied the Udick's request.
He advised Mr. and Mrs. Udick that normally residents who have issues with their developer or Homeowners' Association band together with like minded residents to pool their funds to hire an attorney to file a class action suit. He cautioned them that they then run the risk of having to pay attorney's fees and court costs should they lose the case. He stated that he normally sees this type of action from mobile home communities.
Judge Hill found the Gahans in default and signed an order dealing with the amounts owed to the Association and with remedying the non-compliance issues. After an attempt to serve the order on the Gahans, the Homeowners' Association will notice the Gahans of the intent of the Association to repaint the home. The results of this hearing are public record and a transcript of the hearing has been ordered by our attorney.
It is our hope to have copies of the hearing transcript available at the Round Table meeting on January 3. We have been told that we may not receive the transcript until later in that week at which time we would make copies available to those interested in reading the details of the hearing. Any Harbor Hills Homeowners' Association members who are interested in discussing this matter or some of the letters that have recently been sent out are invited to attend this next Round Table meeting. Michael Rich will be more than happy to discuss these issues with any residents who are interested in attending.
Mary
Posted by Michael Rich at 6:21 AM

Lillian Riley, Harbor Hills own "Cookie Lady," is probably baking cookies as you read this. She sends at least 10 boxes of cookies a week to our troops in the Middle East. Mrs. Riley loves to make cookies and the troops love to receive and eat them, so it is a winning situation for everyone. Postage is $8.10 a box. Although Mrs. Riley donates her talents and the ingredients, she could better afford to continue her project at her present pace if her friends at Harbor Hills would like to contribute to the cost of postage. Any amount would be greatly appreciated and donations may be dropped off at the golf pro shop. If you know of a soldier that would like to receive a box of treats from "The Cookie Lady," please email Mrs. Riley at lilril10@aol.com or phone her at 753-1831. Mrs. Riley has received many notes back from grateful recipients and considers each of the soldiers one of her children. The soldiers appreciate Mrs. Riley and her cookies and those of us at Harbor Hills who know her appreciate her generous and caring spirit.
Mary
Posted by Michael Rich at 7:45 AM

* Please don't forget to bring in your non-perishable food items for our Holiday Food Drive. The last day is Monday, Dec. 18. All donations will be taken to the Lady Lake Food Bank.
* The Harbor Hills Tennis Association needs nominees for the HHTA Board for 2007. The sign up sheet is on the HHTA Tennis Board. Please sign up if you are interested or if you would like to nominate someone.
* Flu shot will be given at the club on Tuesday, Dec. 19 from 9:00 - 11:00 am. Pneumonia and tetanus vaccines will also be available.
* Attention Grove Homeowners! Anyone interested in serving on the Board of Directors of The Grove Homeowners Association should contact Jack DiSavino at 750-2347.
Posted by Michael Rich at 10:39 AM

Hope you didn't miss Monday night's boat parade! The Marinated Mariners put on a great show for the community.
Mary 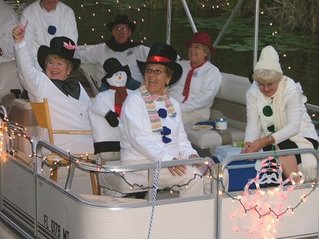 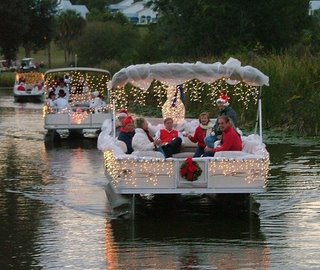 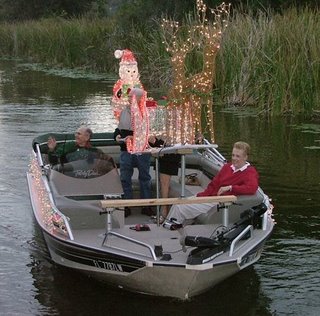 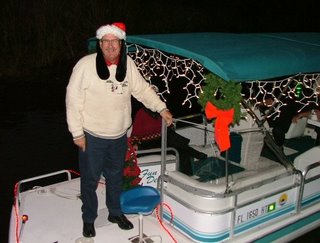 The time for the memorial mass for Joe Lubitsky has been changed to NOON on Wednesday, December 13. The serivce will be held at St.Timothy's Catholic Church in Lady Lake.
Posted by Michael Rich at 6:44 AM

For some festive fun, please plan to join the Marinated Mariners at the marina at 5:00 pm on Monday, December 11 for the annual boat parade. The Harbor Hills Chorus will be on hand to give them a musical sendoff. Then make your way to the #10 fairway for the best viewing. The flotilla of decorated boats will make its way down the canal and then turn around at the entrance to Lake Griffin and continue back to the marina.
Mary
Posted by Michael Rich at 12:47 PM 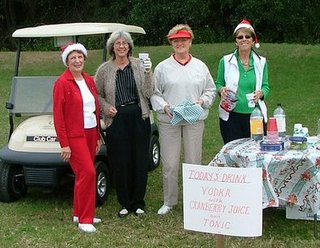 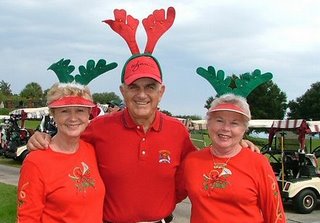 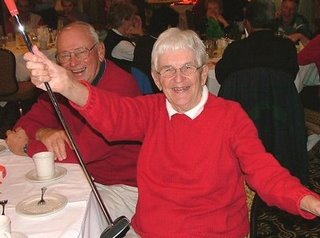 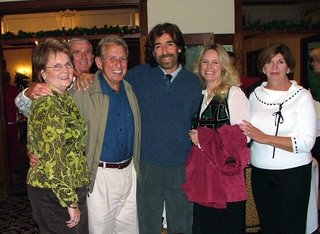 Holiday Fun for a Great Cause

The Harbor Hills Ladies Charity held their annual golf tournament, dinner and raffle yesterday and, as usual, it was wonderful fun and a great success. Many deserving local families benefit from the efforts of our members 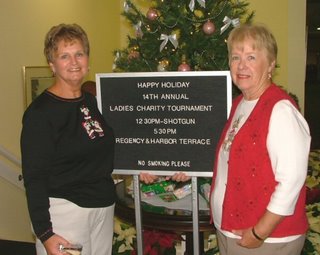 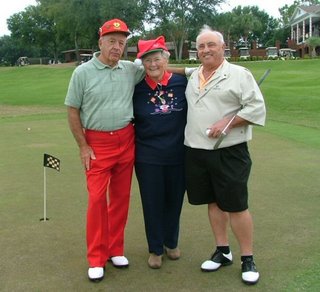 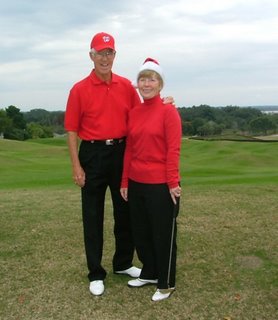 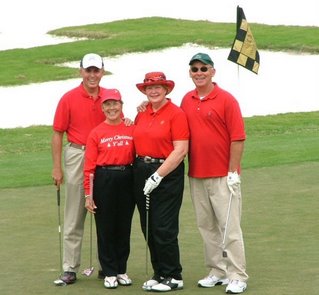 Strange Sight on the Racquetball Court 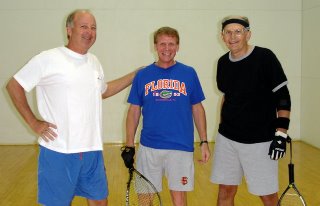 game is just weeks away!

The donations collected for the Take Stock in Children program from the Harbor Hills members who attended the annual Trim the Tree party totaled $1,990.00. Maureen O'Toole who directs the program locally was in attendance at the party and wishes you all to know how much your donations are appreciated. We will be forwarding the donations to Mrs. O'Toole who assures me that she will write a thank you from the program to be published in a future newsletter. One year she wrote individual thank you notes, but several of our members suggested that the postage could be saved and used for scholarships if she wrote one thank you to our members. Again, thank you for your generosity!
Mary
Posted by Michael Rich at 7:57 AM

It is time for our annual Food Drive. Starting today, we will be collecting non-perishable food items through December 18. Food should be dropped off at the Golf Shop or Tennis Center. All donations will be taken to the Lady Lake Food Bank. So please clean out your pantries and remember to add some extra food items to your list for your next trip to the grocery. Your donations will be greatly appreciated during this holiday season.
Mary
Posted by Michael Rich at 10:11 AM

Mrs. Jeanie Lubitsky wishes for me to share with all of you that Mr. Joe Lubitsky passed peacefully from life on Thursday, November 30. His funeral mass will be held at 9:30 am on Thursday, December 7 at the Sacred Heart Church in Riverton, NJ. A Mass will also be celebrated at 10:00 am on Wednesday, December 13 at St. Timothy's in Lady Lake. Mrs. Lubitsky would like to thank everyone for their prayers and loving support during this difficult time.
Posted by Michael Rich at 6:38 AM

I am sad to report the passing of Joseph Lubitsky, a resident and member of Harbor Hills. Our thoughts go out to Mrs. Lubitsky and the rest of the family. When we hear about funeral arrangements, we will pass along that news as well.
Mary
Posted by Michael Rich at 10:36 AM

Just a reminder that the next meeting of the informal Round Table Discussin Group will be held at 10:30 am on Wednesday, December 6. All are welcome to come and discuss the latest happenings at Harbor Hills. Hope to see you there.
Mary
Posted by Michael Rich at 10:34 AM